Well, todays talk was interesting; there were certainly more people participating today. Im going to divide this blog into the different questions that we had.

a) The first thing we talked about were HATERS. When we talked to Dave Cormier he started off by saying don’t become famous. He said this so we could avoid being attacked on the internet. Now we addressed this question to Rebecca Hogue and Helen DeWaard. What I understood from what they say is that we should address it but not feed it. We have to remember that we can always block anybody from any social media. We should be alert with our stuff and if we aren’t going to use it, then we should delete our account. Another thing we can do is find out what is feeding that person, normally it is the reaction, so basically just don’t react to what they are saying.

b) Then they talked to us about how much of our personal life we should share on the internet via blog or any other social media. We shouldn’t post things like our address, phone number and in some cases, family members. We are trying to be seen as human but we don’t need to have private information in public.

c) When there is something about you that you don’t want to surface the best thing we can do es do more good stuff so that you can bury the negative things. As Ken said, if we want to erase negative stuff we just have to post a lot of positive stuff.

d) There are people who want to avoid creating a digital identity but Rebecca says that if we don’t actively work to create a positive one then one will be created for us and we are going to get one that other people make up for us.

"If you don't create a digital identity, one will be created for you". –@rjhogue. This is SO important, people. #iTecGda #Semanai

Here is the talk in case you personally want to see it, there are other things that they talked about too.

At the beginning of the class we had Diego Zavala teach us a little about making videos. He showed us where to download music, photos and even footage in a legal way. We downloaded things that had a creative commons license. After the lecture, we had to make a video of our own. I made a video with my friends and here is the result.

ok, ok this blog isn’t really about how to go viral

I just wanted to catch your attention haha

. But now that you’re here let me tell you what we learned. The main idea is to get social, not just blogging, YOU CAN GO ANYWHERE AND DO ANYTHING (well not really anything, but you get the point).

So, first thing is first; presence can create opportunity. This time were talked to about our presence on the internet in different medias like: Facebook, twitter, reddit, LMS, Youtube and others that I might have forgotten. They gave us an example of a girl who loved Japanese trends and nobody from her community shared the same interests as her. So she decided to go on the internet and leave her digital tattoo (tattoo, because is more than a digital footprint). She started to become very popular and after some time Japanese companies started sending her things and paid her to make reviews on those things. So this is when the speakers from today showed us how to make these maps. (The one below is my personal one, by the way).

On this map I located all the social medias that I use, depending on what I do on and with them.

In this map, the first thing you should notice is the horizontal axis. On one end we have Resident and on the other end we have Visitor. These define whether your use of a social media is mainly just you doing a task without leaving any trace of yourself (Visitor) or you are participating actively so that other people can see what you are doing, posting and they can react to your actions (Resident). The vertical axis has Personal  and Institutional  on one end each. I think this axis is pretty straight forward, if the social media gets closer to personal than is for personal use and viceversa if it gets closer to the institutional side.

Well ._. ken wanted us to do something that we had never done… and I decided to try out snapchat haha. I’ll post the video below. I really don’t say much, although technically i tried it out. Actually I have a youtube channel where I posted tutorials on how to program in c++, you could go check it out over here.

Just in case you want a more detailed of the talk, here it is:

These are the photos that I took. for this activity we had to do a photo safari

. Well these photos are supposed to reflect on who I am. The picture on the right is just funny to me because I am a fan of Einstein. The other four really express how I feel, the world is a scary place, but instead of trying to stay away from everything, I think we should learn to embrace that which surrounds us.

Today we had a very interesting talk with Laura Gogia and Lee Skallerup then we had another talk with Amy Burvall and Alan Levine. In the first talk I learned about blogging, what to blog, when to blog and how to blog. A lot of the doubts I had were things like what should I post? What if people don’t don’t like what I read?

There was also a concept of our security when posting personal things like photos of ourselves or our families.

After the talk with Lee and Laura, the things that stayed in my mind were to post whatever I considered important to me, my blog is supposed to be for me, not that much for other people. So this way I shouldn’t worry much about if others like it. When I post something I should first think if it could be potentially dangerous for my security, for example I probably shouldn’t post where I live and the Golden Rule is to not post anything that I wouldn’t want my mom to see. Now sometimes I don’t necessarily want to post something that is for me, maybe I just want to show people what it is that I do and how I do those things. It could be even a blog that teaches other how to make something. This kind of blogging is also good because it creates a reputation of yourself and a good one at that. This is has positive affects on your social life.

Then we had the talk with Alan and Amy. In this part of the day I learned that there are different styles of blogging. For example Amy is a lot more creative while Alan is more focused on the content of the blog. One concern about blogging was if people were going to use the stuff that we upload, for something bad. And well that is why we apply the Golden Rule. We also shouldn’t worry if someone makes money out of what we post. Like Alan said, If someone can make money from the photos that he takes, then good for them. I guess he has a point, I mean we are not going to be affected by it and it feels good to have helped that person. Amy said that when people used her stuff from her blogs she was, at first, bothered by it; but then she said that she learned to live with it. I believe we should do the same. Towards the end of the talk both of us encouraged us to be very active on our blogs and other social media. Here are both talks, just in case you are interested.

Good day everyone, today is the first day here with Ken in semana i. We began our day with a group talk with Dave Cormier. We are learning about our security on the internet. Mostly the questions that we asked were mostly about what we can do to protect ourselves. If you want to see the talk here is the video:

So, I’m going to talk about the things that I learned in this talk. whether  you like or not it is practically impossible to not be on the internet. One way or another you will end up on the internet. It can be possible now but in the future it will probably not be.

A good thing to do is to google yourself and see if what came up is what you like to be known as. Maybe nothing came up, that might be a good thing or a bad thing depending on who you are. Let’s say for example that you want to apply for a job and you are competing with someone else for that post. Well if the company googles you, they will probably choose the person that has a positive image online rather than the person that is whining online or simply doesn’t have an image online.

Many people suffer by cat fishing and this is a very common thing. For those people that don’t know what cat fishing is, it’s when someone steals your identity online to take money away from people that you know. There really is no solution to this because a hacker will get in if he really wants to. We should  just have different passwords for every social account and just change it again when we find out that our account got hacked. 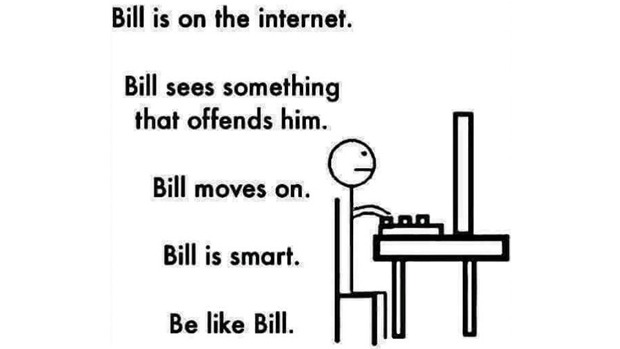