After about 13 hours of trying to start studying i finally managed to do so. Here's a little study guide i made from the help of the Internet and other people's blogs: (INHERITANCE AND POLYMORPHISM ARE ON MY 1ST PARTIAL STUDY GUIDE POST)

CRC Cards: Class, Responsibilities, collaborators. Although CRC cards were originally introduced as a technique for teaching object-oriented concepts, they have also been successfully used as a full-fledged modeling technique.

Responsibilities: something that a class knows or does.

Collaborators: another class that a class interacts with to fulfill its responsibilities

Overloading (compile time) and overriding (runtime): The most basic difference is that overloading is being done in the same class while for overriding base and child classes are required.

OVERLOADING: Method overloading in Java occurs when two or more methods in the same class have the exact same name but different parameters.

Also a valid case of overloading, since the   //parameters are of different types:

//A class for adding upto 5 numbers

Here we have 4 versions of same method “add” which means you’re overloading the method add().

OVERRIDING: An overridden method would have the exact same method name, return type, number of parameters, and types of parameters as the method in the parent class, and the only difference would be the definition of the method.

These two questions are more subjective so i'll let them be.

What is an object, attribute and method?

An object is an instance of a class - it's a concrete 'thing' that you made using a specific class. So, 'object' and 'instance' are the same thing, but the word 'instance' indicates the relationship of an object to its class.

Attributes are also data members and properties of a class, they are varaibles declared inside class, they describe the current state of an object.

Methods perform operations on objects that alreaedy exist, methods must be declared to return something, although it can be void.

Abstraction is the process of hiding the implementation details and showing only the functionality. It is used to hide certain details and only showing essential features of the object. chozacastro´s blog

This class also has an abstract method which doesnt have any code inside because every subclass will make use of this method differently.

This is a subclass called "Rectangle" of the superclass "Shape" thats why we put "public lass Rectangle extends Shape, to make sure Rectangle is a descendant of Shape.

So this is another subclass of the superclass Shape, this time it represents a Triangle and it has a method also called CalculateArea but with a different code than Rectangle because to calculate the area of a triangle is different than to calculate an area of a rectangle so obviously the method has to be different and this is what abstraction is for, to change the inside of the abstract method as many times as we want in the subclasses.

Finally, this is the main class.

Then we created the Shame "triangulo" as a new Triangle so when we use the method calculateArea() it will use the method in the subclass Triangle and not the one in the sublcass Rectangle and as you can see it worked again. i put 10 and 15 again but this time for height and base and the area is of course 75 because 10*15= 150 and 150/2 = 75.

In encapsulation the variables of a class will be hidden from other classes, and can be accessed only through the methods of their current class, therefore it is also known as data hiding. Luis Varga's blog

-Allows the programmer to hide the instance data definition.

-Protects the integrity of the instance data.

-Hides the methods implementatios, this ensures that data structures and operators are used as intended.

What are "has-a" and "is-a" relationships?

The has-a relationship means that one type of object contains another or is composed of another. Some examples are: a car has-an engine, a bicycle has-a wheel, and a coffee cup has coffee.

What are the mechanics for class description (coding) in the JavaProgramming Language?

What are visibility modifiers, their purpose and use in practice?

Public is the most well known of the Java keywords. Public is also the easiest of the Java access modifiers because of its nature. A variable or method that is public means that any class can access it. This is useful for when the variable should be accessible by your entire application. Usually common routines and variables that need to be shared everywhere are declared public.

Private helps to encapsulate your methods and variables most effectively. What do I mean by encapsulate? I mean that only things that should be able to access those methods and variables can do so. There is actually only one way a private method or variable can be accessed: within the class that defined them in the first place. Private variables and methods are those that are meant to be directly accessed by the Java class that owns them.

What happens if you do not put any of the Java access modifiers on your methods and variables? Java will still compile your code, so what gives? No access modifier at all means that the method or variable defaults to package protected. This means that only the same class and any class in the same package has access. You get all of the same access as protected minus the ability for subclasses to access the method or variable (unless the subclass is in the same package).
Java made easy

What is inheritance and Polymorphism?

Different kinds of objects often have a certain amount in common with each other. Mountain bikes, road bikes, and tandem bikes, for example, all share the characteristics of bicycles (current speed, current pedal cadence, current gear). Yet each also defines additional features that make them different: tandem bicycles have two seats and two sets of handlebars; road bikes have drop handlebars; some mountain bikes have an additional chain ring, giving them a lower gear ratio.

Object-oriented programming allows classes to inherit commonly used state and behavior from other classes. In this example, Bicycle now becomes the superclass of MountainBike,RoadBike, and TandemBike. In the Java programming language, each class is allowed to have one direct superclass, and each superclass has the potential for an unlimited number ofsubclasses:

The syntax for creating a subclass is simple. At the beginning of your class declaration, use the extends keyword, followed by the name of the class to inherit from:

This gives MountainBike all the same fields and methods as Bicycle, yet allows its code to focus exclusively on the features that make it unique. This makes code for your subclasses easy to read. However, you must take care to properly document the state and behavior that each superclass defines, since that code will not appear in the source file of each subclass. Inheritance

It allows you to have the same name for a method, but it acts differently based on the class that has that method defined.

For example: Animal is a superclass with the speak method and Dog, Cat and Pig are Subclasses of Animal but each one of them speak differently, a Dog barks, a Cat meows and a Pig Oinks which means you have to redefine the speak method for each class depending on how they comunicate.

So Polymorphism is saying that it has the same method name (speak) but the actions that are performed are dependent on the class.

Special thanks to Luis Vargas, this wouldnt have been done without your help.

Let's start with this chart:

Which modifier to choose?

Access modifiers is a tool to help you to prevent accidentally breaking encapsulation(*). Ask yourself if you intend the member to be something that's internal to the class, package, class hierarchy or not internal at all, and choose access level accordingly.

The following rules for inherited methods are enforced:

Let’s start with this chart:

Which modifier to choose?

Access modifiers is a tool to help you to prevent accidentally breaking encapsulation(*). Ask yourself if you intend the member to be something that’s internal to the class, package, class hierarchy or not internal at all, and choose access level accordingly.

The following rules for inherited methods are enforced:

Attributes are also data members and properties of a class, they are variables declared inside class.

Methods perform operations on objects that already exist, methods must be declared to return something, although it can be void.

We can explain this with an example: 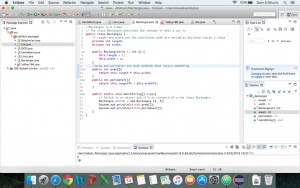