This week I plan to finish the test and have at least 70% of the api code covered. We already have all signup, login, profile and delete account functionality tested and passing. I tried to include the tests in the travis-ci build but it seems to have problems with the neo4j service, neo4j is throwing this error:

And I just don’t know why, should I just remove the https code when the code is being executed in travis? Maybe it’s because it does not find the key and certificate, but I don’t see why that would be the case, I’ll try again anyway.

I have some things left to work in the api before helping Marco or Francisco with the mobile app and the tests.

That’s what I’ll work this week, even if I don’t finish all of this I’ll start working in the Android app with Marco.

This week I worked in the flow logic for cash payments, a user can only pay a pool if it has a debt, but he or she can overpay and then the pool owner has a debt with him. Pool owners can edit the debts and amounts of the users but only if the debt is high enough to surpass the pool’s total. I was working implementing stripe, in fact, we were able to receibe payments from users that registered in stripe (we were missing the frontend that would comunicate with stripe for the registration). Anyway we decided that we don’t have the time to finish this, there are other, more urgent things to do before the final delivery, so we will drop the credit card functionality from the app and focus in making better what we already have.

This week I’ll be working on the payment flow.

When a pool is marked as cash, users should say how much they paid and then the administrator should confirm the amount.

When a pool is marked as credit we will have to request the payment from the users and then send the same amount to the admin (we need to check if this is possible with stripe).

If the admin wants to update the amounts that the users have debt, we need to make sure that everything is kept within the limits of the initial costs (right now you can update a user’s dept to whatever amount). And maybe we should not be able to update the already paid amount (at least for credit), what’s already paid should not change.

Another nice to have would be to find friends on Facebook, instead of searching them by name or email.

Even though we were on vacations I made a lot of progress. From the Cooper API now we can:

--Originally published at That Class Blog

I have a course team! And a brand new project that will defeat all previous projects!

What is this new project’s name, you ask?

The names might be just a working title, it was kind of a joke

And, like in the photo above, our project will not have not a single drop of rain.

What it will have is a fun browser-based game that will not use any kind of plug-in because if Adobe and Oracle don’t even care for the support for their products, why should we? (Well, in fact, even if they did, we wouldn’t use them. Nobody uses them now. Nobody wants to).

The game will, basically, be a platformer with timer and a number of obstacles and maybe enemies. The score will be stored in an online leaderboard. We talked about maybe doing some drag-n-drop technology so we could let the players design their levels, and then compete with their friends and stuff. They could even download a level to text translation and share it with their friends.

My partners for the development for this new project are:

Our project for the semester will be a note keeper app, this app will keep track of the notes you’ve writen as well as its classification and share these notes with other users. 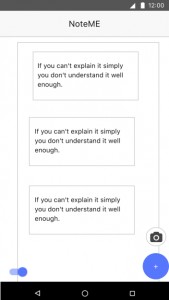 Our note app will have the advantage that you will be able to take a photo from some text and it will extract the text from the image and put it in a note (The image will need to be clear and also be text in its most part). Imagine that a professor wrote something important in the board and then, instead of writing it down by yourself you can take a picture of the board and then have it automatially converted in a note, now you are able to share it with others.

This app will be developed by Francisco, Marco, Estefy and me.

We will be developing in native Android, and will (provably) use the Android OpenCV library and tesseract to perform the text extraction, we will create a nodejs server to share the notes. We’ll test our app following the recomendation of the android developers website.

So we finally have an stable version of the Tanks Online game we did as a project!

Reminder: This game is not ours entirely, we got the game, then customized some stuff such as 3rd person camera, aim freely, visual filters, power ups, respawning, and most importantly a multiplayer capability we learned at the Unity Roadshow about 2 or 3 weeks ago.

Here’s a video showing some gameplay:

We had been testing the game on Ken’s class, it has been fun and it’s looking real different from the first version, Hermes freaking rocks!

While testing we detected some bugs and errors in general, Hermes then fixed it and also added some stuff. We also noticed how the game becomes less stable the more people enters a game, so let’s say it’s a good 1v1.

Hey so our Project for OOP it’s about exploring the object part of the Platform Unity.

We had some ideas before this, but it was all around the Unity Platform, first we decided to make an Arena Shooter in which we interacted with objects as models(Character, scenario, power-ups) mostly made from the Community but it turned out to be more complicated than it seemed.

And so, we saw this Tanks Game in the Unity page, they basically give you all the stuff to make it, you have to follow a tutorial and you end up with the game as a single player or local multiplayer (two players in your own computer).

Seemed ok at first, but then this Unity Roadshow Multiplayer happened. It was a course in which some certified people from Unity teached how to make the Tanks Game a multiplayer with some implementation on the original build.

This convinced us way way more, that means we did abandon the previous project.

The event was not all about the course, also some Developers came up and showed us their projects, how it became a thing, how much effort was put into this and how much time it took them (some guy has been developing his own game for 4 entire years).

Here’s some proof that we attented this event (we had to sacrifice an entire saturday for this).

There we can see Gerardo’s perspective and mine, also they gave us this Unity Roadshow cup (AND THEY GAVE US FREE PIZZA), we were learning objects and their interactions on Unity as how everything assemble to create the game.

At the end we got the multiplayer version(kinda) and started changing stuff from it.

Real talk, Hermes did the most work here as he modified the game to be a 3rd Person tank shooter, changed some stuff from the scenario and right now he’s fixing some bugs (which we detected as we tested the game on Ken’s class).

We are planning to test the multiplayer on different networks to see if it works, since we have been playing on the same network, then we make a gameplay video and also explaining how objects interact and what we learned about it.

Also thinking about sharing it with you guys! It really is fun.