For this assignment these were my instructions:

File input/output is our access to permanent stores of data that last beyond the run time of our application.

Write a program that opens and reads the file 93cars.dat.txt and produces the following data:

You can find the data set at the following link from the Journal of Statistics Education.

This is what I came up with:

In this blog I wrote about 22 mastery topics in order to cover most of the basics of Python3.

A dictionary in Python3 is a type of data that contains a lot of information (that doesn’t have an order) and unique tags (called keys) for every piece of information.

If I wanted to know the color of the house1, I just write dic[house1] and it will return ‘red’.

So dictionaries let you store information that let you access it according to the keys.

As programmers we would like that the user always does what they are told so the program runs perfectly. Sadly this doesn’t happen all the time, so we have to create fail-safes in order for the program runs well.

This is just a simple example and a reminder that we a s programmers always have to think about ‘what could the user input in order for the program to fail?’

Strings are a basic type of data in Python3. These consist of chains of characters put together. Outside of the computer sciences, they are called ‘words’. But in a program a string could be just ‘lasdlk9(&(=lkasd3smds8098*^sdokads’.

Sum and multiplication of strings

If you have a variable x = ‘egg’ and write x *= 3, the result will be ‘eggeggegg’, it will add the same string three times.

We have three repetitive functions in Python3:

As easy as that, you want to analyze a list? Use a for loop. Want to print as many ‘Hello World”s as the user wants? Use a while loop. Want to get a fibonacci number in a series? Use a recursive function.

Here are links to explanation of every repetitive function:

As Ameer Fazal said in a video “recursion in computer science is a method where the solution to a problem depends on solutions to smaller instances of the same problem”. Note: that video is linked at the end of this post.

Here is an example of a recursive function:

Recursive functions look like tree when processed as we can see in the image below: 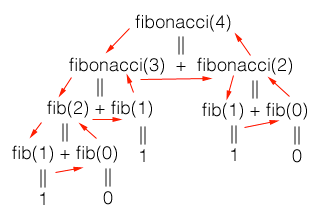 I know this is a hard topic to understand, especially if read and not heard or seen in another graphic way, so here is an alternative explanation:

A library is a Python3 file that contains functions. We have already seen how to create a function (here is a link to the post were I explained them: https://elusblog.wordpress.com/2017/01/31/functions-python3/). The way to create a library is just to create a Python3 file and add functions. Then to use them in another code, the ‘import’ method is required. It’s very important that the two files (the library and the code you are working on) are in the same folder.

As you can see first I wrote ‘from’ then the name of the library file (in this case ‘SPE17’), then ‘import’ and to finish the function that I want to use.

The Zen of Python is a list of ‘rules’ that you should follow when coding in Python3 in order to have the best code.

It can be found in the Python’s webpage: https://www.python.org/dev/peps/pep-0020/

The conventions are pretty straightforward “Simple is better than complex.” for example. In a few words, what the Zen of Python is saying, is that you have to write your code in a way that another person can easily understand it without explanation.

Here is a more in-depth explanation:

Comments are just notes that you can write on your code. When you have a code with 100 lines, comments are very helpful for knowing what each part of the code does. To write a comment you just write the ‘#’ symbol and then write your comment. As easy as that.

How to Write Comments in Python