Due to time shortage I decided to omit this WSQ

Dictionaries are similar to list. They can store many values that can be used when called. The difference between a dictionary and a list is that every value stored in a dictionary as mapped to another value.     &n…

The Zen of Python

The Zen of Python is a document wrote by Tim Peters in August of 2004. This document stablishes 19 software principles that influenced the design of the Python Programming Language.


This principles are shown whenever you type the command “import this” on a Python interpreter. 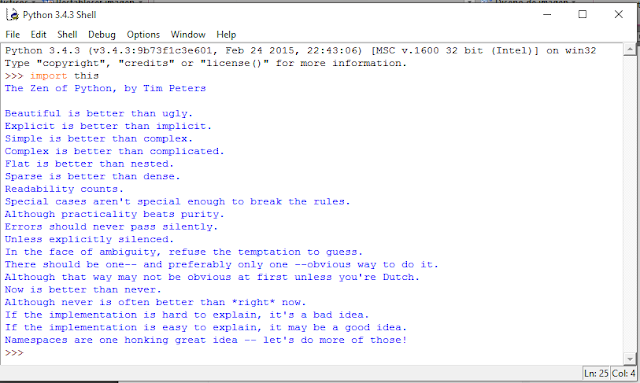 What should you work on?

Week #12 and more partial exams for you.

For this week's readings:
C++ (TC1017) should either be looking at support for your project, ImageMagick C++ libraries are a good start.
Python (TC1014) should be finishing chapter 11 (Dictionaries).

Popular Tags. Add some to your posts!