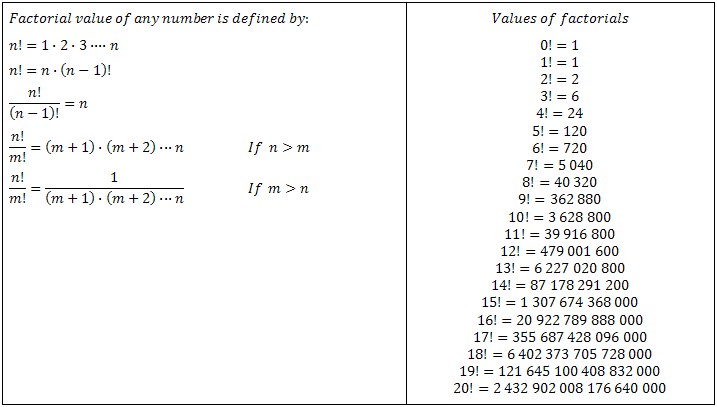 For this assignment we needed to make a factorial calculator. The factorial of a number is the multiplication of all numbers that are lesser than that number until 0. For example the factorial of 4 is equal 4x3x2x1=24

This program required loops as we couldnt use the default python function from the math module.

-So first I used while loop so the user can use the program as many times he like. 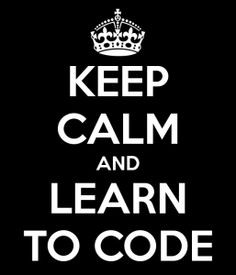 -Then I implemented a for loop in order to calculate the factorial of any given number.

-And finally I used an If so my loop could work as I wanted. 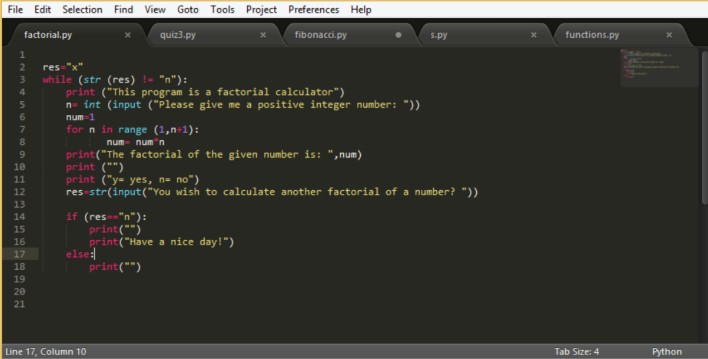 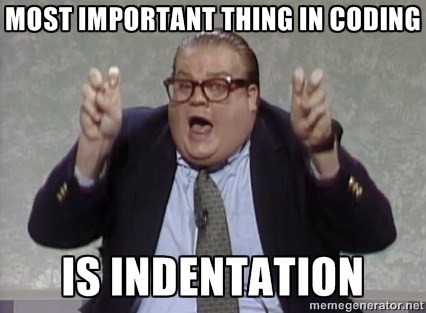 Btw, I´m not sure if I completely understand how indentation works on python and on my Text editor.

The functions are an important part of programming, apparently. Ken says we have to get used to using them and I probably will, some day, I hope. The bright side is that is really easy to define and call functions.

For this program we had to go back to the fun with number assignment, but now we are tasked to do the same operations with functions.

The program is this:

This time we had to create a program that shows the result of a inclusive sum of numbers in a random range that the user has to pick.

-First we have to make sure that the user types the lower and higher number the range correctly, that means tha the lower number has to be lesser than the last number of the range.

-Then we have to make our code sum all of the number between that range, in order to do so we have to use a for loop.

And this is the program running.

This code required to import a module, but what is module?  you might ask. The answer of that question is inside this page: https://docs.python.org/2/tutorial/modules.html

But let´s get back to the assignment; for this program we need to ask the user for a random number until he guesses the exact same number that the our code has chosen randomly.

-First we need to import the random module, with this module we can use a function that selects a random number of a certain range.

-After asking the user to try to guess the number, we need to impliment a while loop so the user can  have many tries until he guesses the number.

-This code means that when the user inputs the right number the loop will end and the program will be over.

-But that is not it, we also need to tell the user if his guess is lower or higher than the actual number. To do this I used If and else conditions.

-I also used a counter

END_OF_DOCUMENT_TOKEN_TO_BE_REPLACED

With this program I learned the basics of the conditionals in python.

This page is helpful for understandig this concept- https://docs.python.org/3.5/tutorial/controlflow.html

The formula for converting Celsius to Farenheit is:

Doing that is the first part of the code, and probably the easiest part.

The next part requires the use of the if and else functions.

This assisgment was a little bit trickier than the previous one, but still is fairly simple. All I needed to do is to ask the user to type 2 numbers and then make 4 different operations with such numbers.

For knowing how to write this code I again read some parts of the “Think Python” book.

I had a doubt about how to do the integer division so I searched online for the answer and this web page gave me the solution.

Here is my final code:

And this is the program: 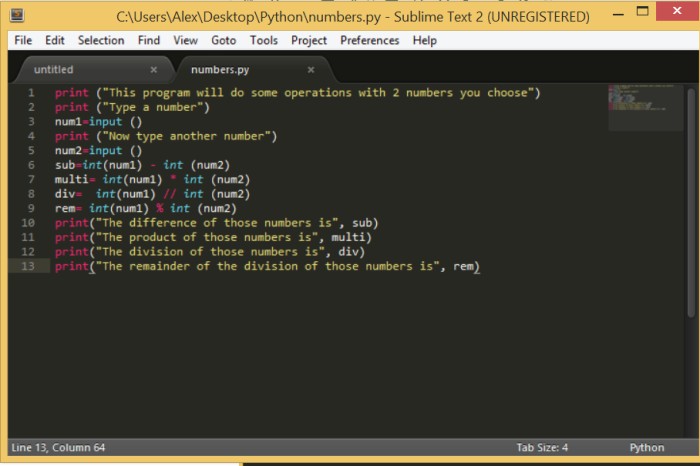 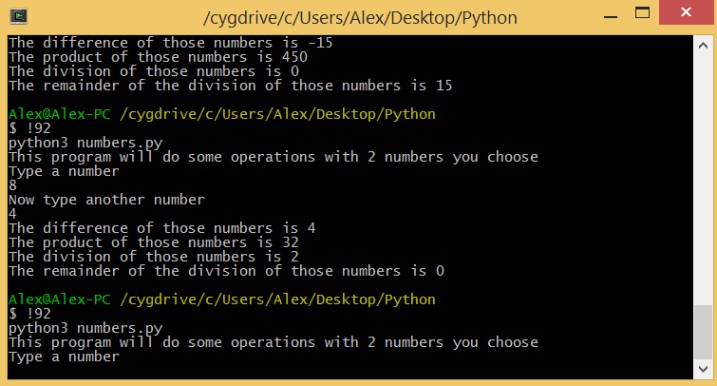 This was the first time I made a Python program ever.

In order to know the basics of coding with python i read the textbook that is on the TC101 web page of this course. Specifically the first and second chapter. 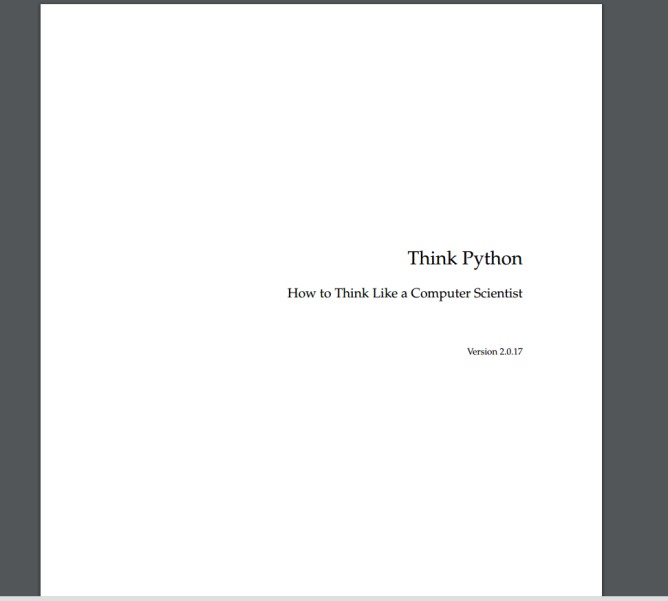 My main problem with this assignment wasn’t writting the code but instead it was running the program in the terminal. With the help of Mr. Ken I finally learned how to make the cygwin terminal actually open any python program. 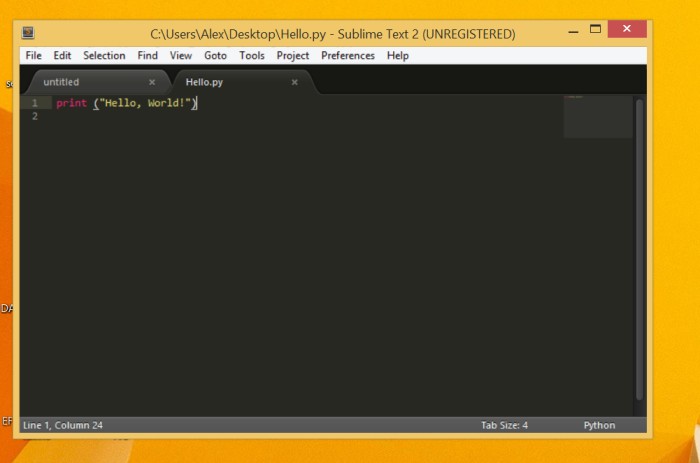 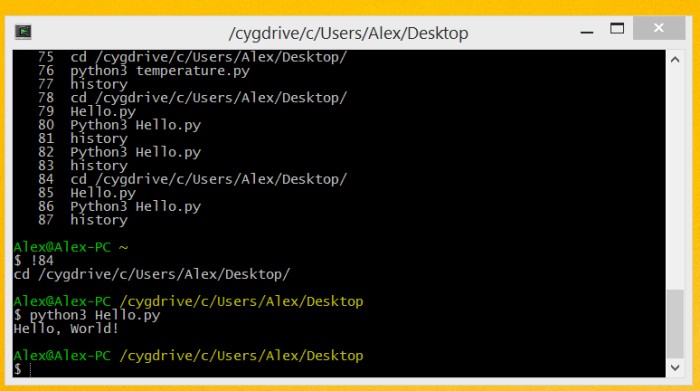 I just needed to tell cygwin the directory of where i saved my code and that was it.

The first text editor  I installed was atom, mainly because it looked cool and good for begginers.

but after doing some research i came to the conclusion that the best text editor for me would be Sublime Text 2 because it has everything I’ll ever need.

After that I installed Python 3 using cygwin.

Therefore I’ll be using the cygwin terminal to run my Python 3 programs.

And that is pretty much my whole coding enviroment (for now at least).