--Originally published at My Programming Course

In this WSQ we have to make a program already. In this case it was a pretty simple one. Doing this program helps you to get used to the lenguage.

I had to write a HelloWorld program by programming in eclipse.

First I had to set up my path for java, in order to use the commands in the Command Prompt.

I had to write javac for compiling my HelloWorld.java

and java to run my HelloWorld.class

Here is a good tutorial for writing a HelloWorld program.

Well, this is as simple as you can get and I still had trouble doing it, thing is that im still “Thinking Python” and java blends all the syntax-related contents inside my mind.

Gerardo Cruz, a friend of mine who is also in this class, helped me out unblending my brain and finally getting this thing done. 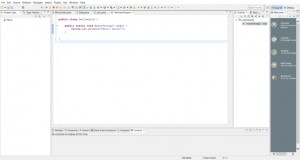 Ok fellas i’m a little late here, sorry, i got sick and have occupied my time on the other classes.

Anyway, here’s Hello World in Java, running from Eclipse and also having connection with Github.

There’s something weird going on here but atleast i managed to connect to Github, gotta ask Ken about this.

I watched some Lynda vids in order to know the basics about setting this thing up and creating a Java Project.

Managing to run my first Java program in Eclipse was easy with the help of this tutorial.

More complicated was connecting Eclipse to GitHub. On my way to this I found out several things: 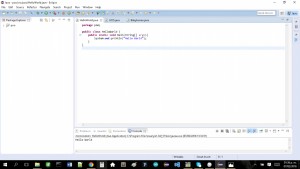 Code for you to copy and paste if you're too lazy to write it yourself :) ..

The first thing to start programing in any language is to print the famous Hello World. In this blog post I’m going to show you how I did my Hello World and what I used to make it possible.

First of all, objects and class-

Objects: Objects have states and behaviors, for example a car has stats like color, form, name and behaviors would be how fast it goes or how many gasoline it use.

In software development, methods operate on the internal state of any object and the objects communicate by methods.

So in resume a method has a bunch of statements inside, and methods are what gives objects its particularities.

Class: A class is like a box that has inside has methods and those methods are affecting the objects inside the class

Now the definition of each word used to make thos program.

“public” means that main() can be called from anywhere.
“static” Tell that theres no need for an input to run the program.
“void” means that main() returns no value
“main” The first thing that runs in all the program.
“String[]” means an array of String.
“args” is the name of the String[] (within the body of main()). “args” is not special; you could name it anything else and the program would work the same. https://www.quora.com/What-does-each-term-in-public-static-void-main-String-args-mean

Now that you have all this information you can make your program.

This will be the result:

All the links in this blog post sends you to the respective information and here’s a video explaining each step.

I also used some Help from an author in Lynda.com called David Gassner.

The code was written using Eclipse, and synced on GitHub with an add-on called EGit.

This is the first official day in my training as a  Java Developer. I actually did this almost a week ago, but forgot to blog about it. First thing I learned: Java is nothing like Python. It seems closer to C#, but I have just glanced a little bit at the abyss, I haven’t stared at it enough.

The task at hand was to make a “Hello World” program. And I did it! This is the most basic of programs:

First we make the class which has the same name as the file, this is the program. Then we make the main function, which will be what is exectuted, in this case a single line of code which gives:

So, it works. But I started getting greedy. How about making a for loop? You got it boss.

Add the for, and then initialize it, set the termination expression, and then the increment. Done, done, done, and done. And now we see here the result:

But I still couldn’t get my fill. I needed more. I needed a while loop.

This one I actually found less confusing than the for loop, but I think it’s easier to screw up. I almost put the variable initialization inside, which would have given me an error, but in some cases it could make it infinite, like if it was initializated before and this function just resetted it to zero. I don’t really know. It scares me D: But it worked!

Now, I could have stopped here. Maybe pat myself on the back and go for an ice cream or something. But I just couldn’t stop. I had to try putting an user input on it. I thought it would be simpler than loops, in Python they would be just one extra line and one modification to another.

There’s a lot going on here that I just barely understand. What I kind of understood, was that the package java.io has the user input classes, so we import that, then create a ‘reader’ buffer for the user input to be processed. Then we use that to read the user input, store it and now we can finally use it. But that’s not all, we need to make an exception handler for whenever something get’s fucky. I used this page to get this part done, and later I will try to understand it a bit better.

The good part is that it worked.

Java is not complicated per se, it’s just that I’m not used to it. At least it is not enough to turn me to the Dark Side.