So, here we are again. At it. Java-ing things up. Ain’t that just fun? Welp, it is. It’s so nice outside. So, watched the game? How’re the kids holding up? Are taking your meds? What meds, you ask? Precisely, that’s exactly why you shouldn’t be off ’em, grandpa. Jeez.

Kenscourses doing some Python importing nowadays with these WSQ’s. The WSQ was received, *(robotVoice)assimilated*, and completed without delay. Really, like, none at all, quite punctual, if you ask me, work ethic worthy of a 100/100, I’d say. Anyways, the deal was to edit a given skeleton to make the class run the main method, for both of the required classes, Book and Library.

Here’s the Book class and its output to console:

And here’s the Library class and its output to console:

Lychrel kind of an anagram for Cheryl, Wade VanLandingham’s girlfriend. This Wade guy sucked at making up names.

I feel the term playground has not caught up with many of my beloved readers -actually, I only have one reader, Miguel, notice me, Ken D: -so here I go: playground refers to the place where the little object boys and little object girls go play around, show off their methods -totally not a euphemism -and meet class instances, imports and guys of the like. It’s like a playground, but for objects, from classes…and then I, but he said and I go ooh ooh, you go aah aah, Lalalala, Ah Lalala

Back to business, or basics, here’s the playground and the console: 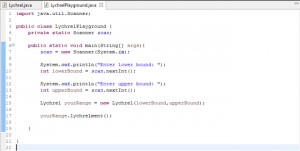 Now, on with the foolishly long code for the class Lychrel: 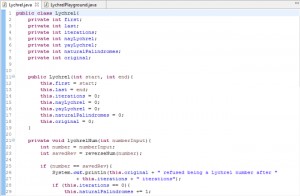 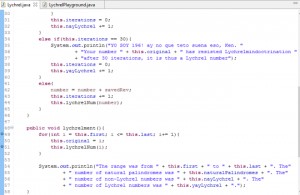 Once again, I’ve defeated the evil corporation of WSQ’s. I’ve mastered the mastering masteries, Master -they’re to the left of the post.