This was my first try using objects in Java and it was a little tricky. 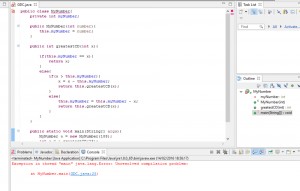 So if one of you knows how to solve this problem, please help me. 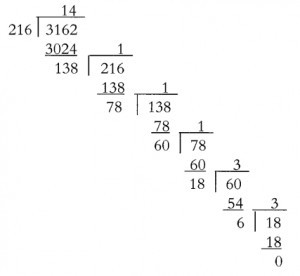 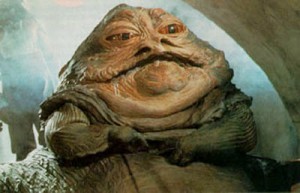 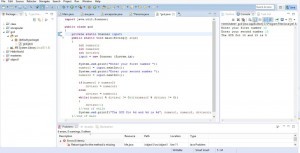 Here is the very first coding activity of this semester (except for the HelloWorld activity), and is a program that outputs the greatest common divisor of two given numbers. The challenge of this assignment was to create the most objected-oriented code as possible. So that instead of doing a simple iterative solution, one number (defined as an object) would receive a message to give the greatest common divisor of it and another number passed as parameter.

In order to accomplish the task, I asked for help to a friend of my mom (she works at IBM and knows plenty of coding nerds). Her friend is teacher in ITESO, and he assigned me one of his best students to help with Java, his name is Alex Ramirez. I met Alex one Saturday morning, and he taught me a lot of basic stuff of Java.

The way we addressed this problem was basing our thoughts in Euclid’s algorithm. I created a main class, and another public class call ‘Number’. In Number, I created two different methods: the first was a void type named ‘setValue’, to assign a value to both of my objects; and another void type called ‘max’, this was the important method where all of the math operations were going to be made. In my main class, I created two objects, val1 and val2, and by using setValue, I assigned a quantity value to both objects (in this case 1160 and 2013 respectively). With my two objects, I called the method max in val1 passing as parameter val2. In max, I declared 3 variables: a (val1), b (parameter), c (remainder of a/b)… And thathaa… When running the code, the output was 29, and I had a big smile drawn in my face.

Later in class, my teammate Dustin (alias Finn) helped me with the synchronization of Eclipse and GitHub showing me an excellent video that clearly explain the steps to follow to achieve the synchro.  As you can see, I’m very good at getting help of others!

Here a I leave some screens of my code in GitHub: 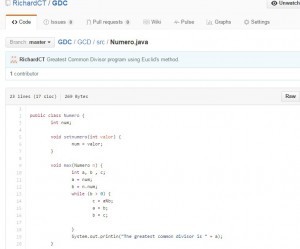 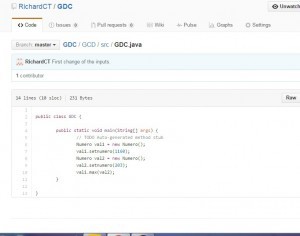 Instead of choosing between his two offsprings [as Sophie], Euclid didn’t have  a a choice, like, at all; this was a bad attempt at making Euclid’s Method fun. I’m not saying that it ain’t so, just that…well…you get it, it’s hard, making math fun when it doesn’t have a cool name.

On with the WSQ.

Here’s the code for the “playground” -because classes play there and stuff -and the console output.

Demonstration, at least, of some grasp of OOP and abstraction -because of the perspective.

Some encapsulation knowledge. On with some theory: encapsulation is the process through which information regarding a class is kept “hidden” -unusable outside of the class itself. It is represented in Java through the use of the words “private” or “public” in the object’s attributes or methods. 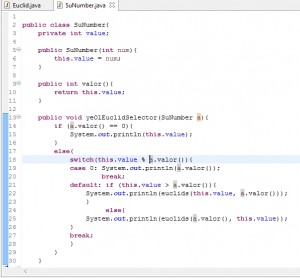 Ending the least fun of the blog posts. Euclidean method git got from the guy at Cut the Knot

Here's my #WSQ06 code for the GCD. At first, I wasn't really sure how to implement the object-oriented stuff into the code but then I had a look to some of my classmates from #tc201 that had this wsq already done and that helped me. Specially Itzel's since I think it's pretty readable and understandable. So special thanks to her!

Now it's my turn to help somebody else, so if you're no sure how to do this wsq, check out my code! 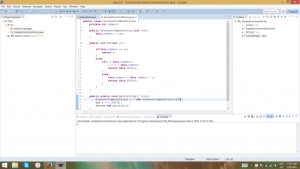 For this WSQ i had to find the greatest common divisor of two numbers using Euclid's algorithm. 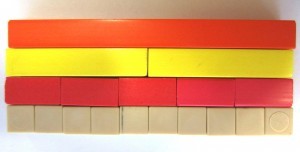 I had no idea what Euclid's algorithm was so I did a little research and found this useful video that helped me make the code: Click to watch

Link to the code: Code

At first i had some trouble developing this code so, as you can see, i put a lot of SOP's (System.out.println) in between lines to check better what was going on and after about half an hour i realized what I was missing in my code.